Heather and I moved to the Yukon about a year and a half ago. Last February, shortly before the pandemic, the Yukon government did a public consultation on getting rid of daylight savings time changes. When the results came in, 93% of Yukoners were in favour of stopping seasonal time changes.

Let’s just say… I was stoked.

As someone who grew up in Saskatchewan and never experienced daylight savings time changes growing up (Saskatchewan is on permanent daylight time), I’ve always been mystified by other provinces’ seasonal time changes. When I moved to Ontario for grad school, experiencing the fall time change for the first time left me totally floored. (So confusing, and so dark!)

Ever since then, I’ve always been excited to see other countries’ proposals to eliminate seasonal time changes, although (in the case of Egypt and Russia, for example) these haven’t necessarily originated from governments that I’d otherwise look up to.

Yukon making the change was thrilling both on account of, well, living here, and on account of the government conducting the public consultation and then going for it in the same year. Last spring’s time change was the last one to take place, and in the fall before the time change would’ve normally happened, the Yukon government sent friendly reminder cards to people’s mailboxes to remind them that seasonal time changes were a thing of the past: 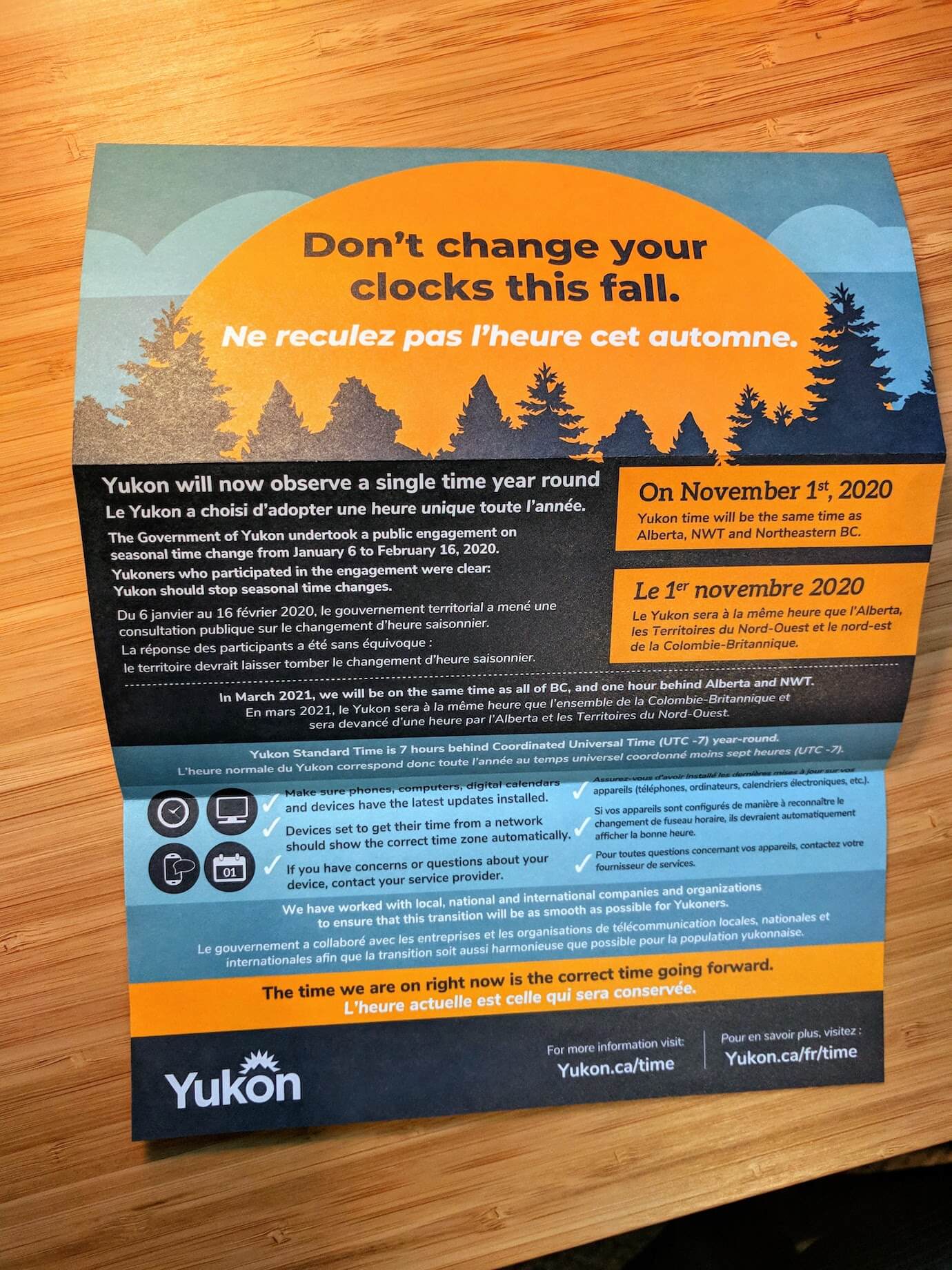 When other provinces fell back an hour in the fall, Yukon stayed the same, which also brought us an hour closer to family, friends, and co-workers in Ontario over the winter. It’s been really nice!

There was a great CBC article (hat tip to Lucas, who shared this!) interviewing the Yukon public servant who had been tasked with actually implementing the end of seasonal time changes here.

Practically speaking, that meant creating a new standalone timezone (for Yukon time) and somehow communicating that to technology companies, telecoms, and other groups responsible for “time” as determined by all the systems we rely on:

“It has been a real adventure to figure out how exactly time works, who controls time, what time is,” said Andrew Smith, who is leading the government’s preparations.

In order to change Yukon’s time zone online, Smith said he had to follow “the bread crumbs” to track down the international time zone databases. He says he’s been in touch with all the telecom companies in the territory, trying to ensure phones and computer clocks don’t fall back an hour on November 1.

He urged Yukoners to ensure their phones have the latest updates, and are set to the time zones “UTC -7 Yukon” or “Whitehorse” on Apple devices.

A couple of times during the summer, my laptop greeted me with the following screen, and all I could think was: I can’t wait!

What about the rest of Canada?

Aside from Saskatchewan and now the Yukon, a number of Canadian provinces have planned to eliminate seasonal time changes, but haven’t gone forward with it yet.

In the case of British Columbia, it passed legislation in 2019 that makes it possible to switch to permanent daylight savings time. But, it plans to only change in coordination with Oregon, Washington state, and California.

Likewise, Ontario passed legislation this past November that also makes it possible to end seasonal time changes. Similar to BC, though, Ontario only plans to change if Québec and New York do the same.

Coordinating across regional boundaries makes sense, but it causes a sort of “lowest-common denominator” approach where things will only change once the least-enthusiastic province or state changes, which could be decades from now.

Studies have shown that the bi-annual tradition can cause “serious negative effects,” including increased depression rates, heart attacks and strokes, Roberts said.

He added that one of the benefits of ending the twice-yearly change includes promoting more consumerism by giving residents more hours of daylight in the evening.

In the United States, people have been making the case for eliminating seasonal time changes for years. Among many other reasons:

…there’s evidence that a year-long DST might reduce traffic-related deaths, especially for pedestrians. On the whole, daylight saving means that more travel occurs during daylight, when it’s easier to see pedestrians, which is why researchers calculate that full-time DST could save a few hundred lives annually.

Finally, there’s another, simpler benefit to making DST year-round: It’s a hassle to switch your clocks and adjust to a new time twice a year. And, as mentioned, doing so appears to have real costs in terms of productivity and accident rates, as our bodies adjust to the missing hour of sleep.

Everyone seems to agree that seasonal time changes have more downsides than upsides. But, at least in Canada, only Yukon has had the courage to actually get rid of them. To the folks in the Yukon government that made this happen, I tip my hat. Thanks and keep on being awesome! See you next week, same time as always.